One of the Paradigm Projects specialties has always been designing and building what call ‘Theatrical Spaces & Environments’. I was trained as a theatrical set and lighting designer and have always pulled employees and subcontractors from my contacts their and the exhibit building trade. 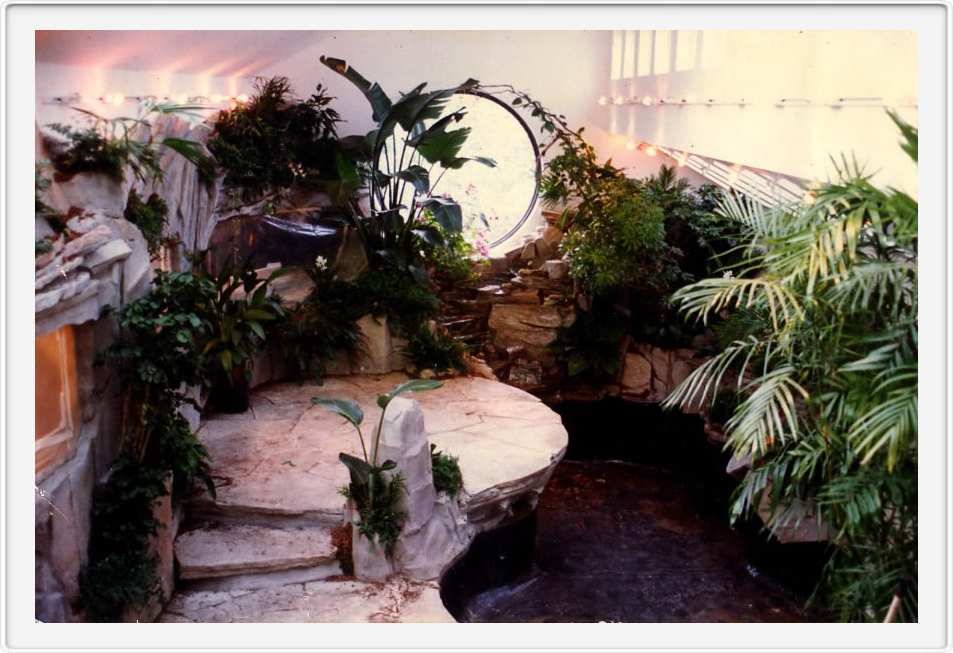 Back in the spring of 1996 after having successfully built scenic elements for a themed restaurant environment (see Paradigm@Work: Great American Cafe Glastonbury CT) we were referred by the interior designer of that project to a residential client of his that was an avid collector of Japanese Koi and other tropical fish who wanted a pond and tropical like koi pond environment for his fish built in the space of a garage addition he was having put on his home in Hewlett Harbor, Long Island.

After discussions with the designer regarding what he wanted to achieve we decided to build on site an epoxy fiberglass reinforced tub for the pond and after framing out our basic structure we would fabricate the rocky environment surrounding the pond using techniques I had used as a kid to build the mountains on my HO train set only on a larger scale and using QUIKWALL® Surface Bonding Cement (SBC), and/or USG Structo-Lite® basecoat plaster over expanded metal lathe instead of USG Hydrocal® plaster over window screen although we would still use those materials for the out of the way and high up sections that we wanted to keep thin and ultra light weight.

After the main structure was engineered and built the interior environment began to take shape by framing out the shapes that serve as the armature and structure for what eventually be the basic "geology" or the room.

The walls of the pond we formed by building short curved vertical 2 x 10 12" o.c. walls that were the sheathed in two layers of 3/8" bending plywood (also know as Flexply, Wacky Wood and Wiggle wood). The flex ply was laid out so that the butt joints of the different layers wouldn’t over lap and the layers were glued together with West Systems epoxy for additional strength and support.

Along the bottom of the pond where it met the vertical sidewall we then put in a small fillet of Structo-Lite just so we wouldn’t have a hard right angle in the base of what would eventually be our fiberglass tub.